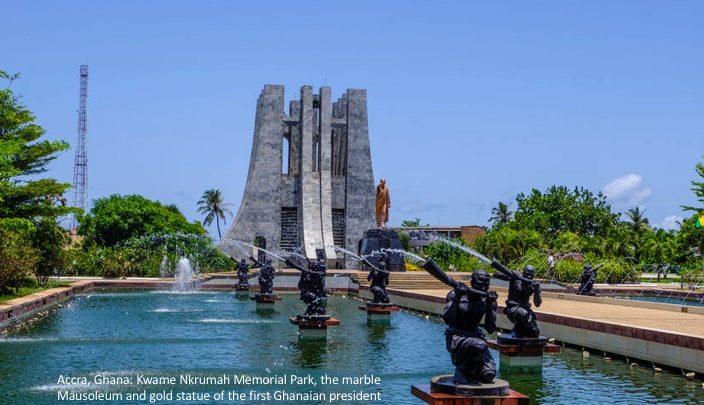 When it comes to multilingualism, it is not a West African country like Ghana that comes to mind easily. This is no coincidence: Anglophone Africa is not really a focus of English studies and certainly not of English language pedagogy. While postcolonial literary and cultural studies have dealt intensively with the great representatives of Anglophone African literature such as Chinua Achebe or Ngûgî wa Thiong’o, not to mention the white South African authors (Nadine Gordimer and the two Nobel Prize winners Doris Lessing and J.M. Coetzee), Anglophone Africa has been virtually marginalized in the pedagogy of Teaching English as a Foreign Language.

Anglophone West Africa in particular not only makes great contributions to contemporary English literature, but the knowledge of the history of its colonisation by Great Britain is one of the keys to understanding the present and Europe’s interconnectedness with Africa: The Republic of Ghana, West Africa

all bear witness to British colonization and its postcolonial legacy.

The urgency of dealing with West Africa

In this respect, there is a real need to deal with Anglophone West Africa in English didactics and in the foreign language classroom, and it is to be welcomed that North Rhine-Westphalia has recently designated Nigeria as a new thematic focus of the German Abitur examination. The marginalisation in English language pedagogy was also one of the reasons for the joint seminar “Studying and Teaching West Africa” which I was able to hold in the summer of 2017 in Giessen together with the Dr. Andrea Rummel, a literary and cultural studies scholar in the English department. We were lucky and glad to win Prof. Dr. Helen Yitah from the University of  Ghana, Legon in Accra, who was a visiting professor at Justus Liebig University, as a lecturer for several sessions in this seminar. She provided us with her unique expertise and first-hand insight and experiences from inside Ghana.

A conversation with Helen Yitah

During another visit in 2018 she agreed to have a recorded conversation with us about the colonial past and the postcolonial present of Ghana. In the video which presents excerpts from a long and very inspiring conversation she talks about

She also shared with us very personal experiences of growing up multilingually, and she talked about her project of researching Ghanaian indigenuos literature which has only been handed down orally.

The desideratum of a postcolonial pedagogy

What Helen Yitah tells us about her country is a small glimpse only, compared to the huge task of exploring Anglophone Africa ahead of us. In the age of globalization and migration it is high time for foreign language pedagogy to broaden its scope dominated by a focus on the western world by including the Anglophone cultures and Englishes of the global south, and if it’s only to overcome obsolete thought patterns of those ‘down there’ in Africa and us ‘up here’ in Central Europe. In many ways our lives in the middle of Europe are directly interconnected with those of the people in West Africa and in other parts of that huge continent. This is reason enough to explore with the young people in our English classrooms the Anglophone cultures of Africa.