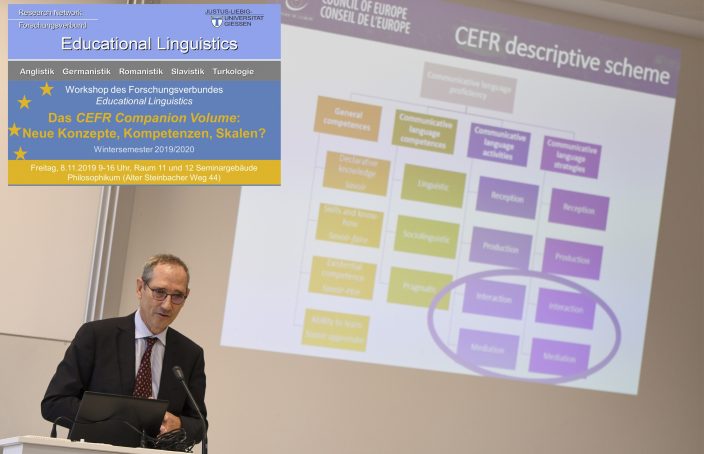 Almost twenty years after the publication of the Common European Framework of Reference for Languages (CEFR), the so-called Companion Volume is now available. It rewrites some central concepts (e.g. mediation) or introduces whole new domains of competence, e.g. pluricultural and plurilingual competences.

A Conference on the new Companion Volume

For this reason, the Research Network Educational Linguistics at Justus Liebig University Giessen, a network of the philologies, organized a conference on the new Companion Volume (CV) on 8 November 2019. In her introduction, Prof. Dr. Eva Burwitz-Melzer stressed that the CV had more or less been expected, since the CEFR (2001), despite all its merits, had some weaknesses and gaps. She explained that the conference was designed to illuminate some aspects of the Companion Volume (available since the end of 2018), from the perspectives of various foreign language didactics. Accordingly, the invited speakers came from English Studies (Prof. Dr. Eva Wilden, University of Duisburg Essen), Romance Studies (Prof. Dr. Daniela Caspari, Free University Berlin) and German as a Foreign Language/Second Language (DaF/DaZ, Prof. Dr. Claudia Riemer, University of Bielefeld). Dr. Brian North (Eurocentre Foundation, Zurich), who has been leading and coordinating the development of the CEFR for 30 years and, most recently, the CV, gave the introductory keynote speech.

In his role as co-author of the CEFR and CV, Dr. Brian North began by giving an overview of the overall concept of the CV. He explained

In connection with the fundamentally redesigned mediation concept, he emphasised that, generally speaking, the use of language always implied interaction so that CV’s interactional competences could no longer be separated from language competence. Therefore, they had to be enhanced and trained in an integrated way as is the case in modern task-based teaching and learning. North pointed out that the scales could and should not be separated from each other; rather, they should be used in combination with other competence domains and scales. He emphasised that the CV – like the CEFR – was “a reference work, not a standard to be applied”. Accordingly, he stated that the users were called upon to find and generate manifold opportunities to implement them in specific settings and use them according to the respective educational goals.

In an interview with Prof. Dr. Wolfgang Hallet, Dr. Brian North explains the innovations of the CV as compared to the CEFR in more detail.

In her talk, Prof. Dr. Claudia Riemer discussed the CV in a critical manner from the perspective of German as a Foreign Language and German as Second Language (GFL/GSL). She praised the innovation that the CV introduces a new Pre-A1 level with descriptors below the CEFR’s A1 level. These descriptors, she explained, are of particular importance for the field of GFL/GSL because of the poor German language skills of refugees and migrants. For these people, the German language skills at A1 level are a core problem since they are the skills that Germany requires as a pre-condition for immigration. For many, the A1 level is a hurdle which they are not able to overcome. Prof. Riemer also critiqued that pre-A1 scales were not provided for all competence areas; there was room for improvement, she noted.

Prof. Dr. Daniela Caspari presented the highly complex construct of CV mediation, which includes not only the mediation of utterances between languages, but also the mediation of communication and concepts within a language as well as the associated strategies. She then brought this interpretation into a critical comparison with the current interlingual conception of language mediation in Germany. She was of the opinion that the concept of mediation in the CV was too broad. Following her lecture, the question was then discussed whether this new concept could really further develop foreign language teaching or whether the new, broad concept of mediation would not create completely new difficulties.

In her talk Prof. Dr. Eva Wilden addressed the role and place of the concept of digitization in the CV. She noted that the term ‘digital’ appears only twice in the entire document, which in her view indicates a marginalization of digitization processes. In addition, she sees a limited benefit in the scales for online interaction that are supposed to stand for digitalized ways of interacting and communicating. The skills descriptions are not really online-specific, she argued, since they could also be applied to ‘offline interactions’. She proposed to link the CV’s descriptors and scales for online interaction with other existing models of digital learning and communication.

The CV and the German educational standards

All in all, the papers presented at the conference led to critical discussions of some of the CV’s innovations, even though the print version of the CV has already been finalised and suggestions for changes cannot be taken up any longer. However, experts were repeatedly encouraged to engage in an intensive discussion of all aspects of the CV, not least in order to counteract the problematic use of scales in the German educational standards since they have wide implications in the German educational policy or materials development. The reductive implementation of the four language skills in the educational standards and the use of the CEFR’s global scale in migration and integration policy were examples that were given.

This post was co-authored by Leonhard Krombach and Jan S. Schaefer, Giessen