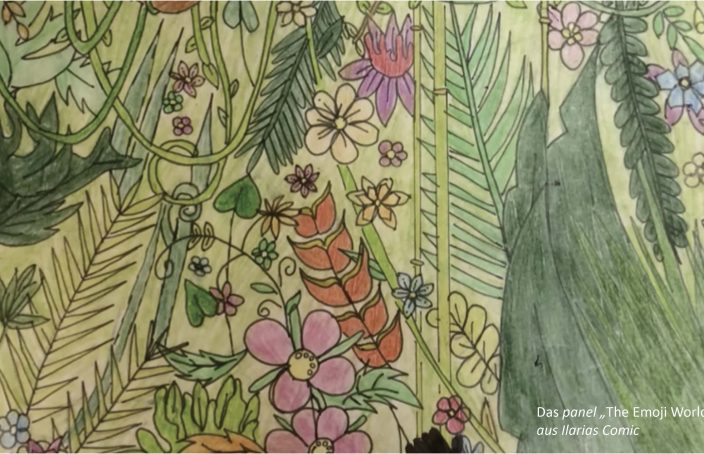 After working for a year in a more coursebook-oriented way, I felt like getting a little more creative again. I had survived the first year in the teaching profession. Now I wanted to try out how I could plan my lessons using the competence task and find out whether my classroom work could benefit from it.

Three thoughts brought me to work with a comic:

1. I had organized the learning environment for my 7th grade class at a comprehensive school very much to the textbook and, as a result, my students didn’t speak a lot, especially with regard to personal storytelling.

2. Many of my students like to draw. The walls of the classrooms were decorated with their pictures, and often they scribbled as they listened.

3. Last but not least I happened to come across a very inspiring article by Philipp Stueckrath and Carola Surkamp (2015, see below under literature) while I was reading the teacher journal Der fremdsprachliche Unterricht English, and so I became interested in comics. A panel from Ilaria’s comic

That’s why it had to be drawing and storytelling! I wanted to create something with the students that they and I as well would enjoy, and I wanted to offer them opportunities for aesthetic experiences.

Therefore, my aim was to make the students draw an autobiographical comic and present it to the class in English. How did the student smanage to do that? What do students need to make this happen?

1A comic strip is a demanding, complex product. This is why the teaching unit was designed as a complex competence task (material 1; all materials in the download) and translated into a process model (material 2). The following steps of the unit are described in these materials. 2The students were introduced to the genre of comics by means of a sample comic (material 3), a sample panel (material 4) and to storytelling in five classical steps structured as a panel sequence (material 5). 3Students were encouraged to give detailed feedback on the oral presentation of a story using a feedback sheet (Material 6).

Here are the download materials: Planning documents and worksheets The model of the complex competence task

A funny anecdote: During the initial phase of the unit I noticed that there falling characters who were built into many stories: they were stumbling, falling down or falling on something. When I asked a group of students about it, their prompt answer was: “That’s the falling action”. The explanation was easily found: In the sample comic (Tom’s homework, Material 1) a boy fell out of the window towards the end of the story – a clear case of “falling action” as in the tension pyramid (antonym: rising action). Therefore, slightly over-generalizing, some learners translated “falling action” literally as a falling character. Fortunately, however, this could soon be clarified. 🙂

What are the technical requirements?

… and this has to be considered