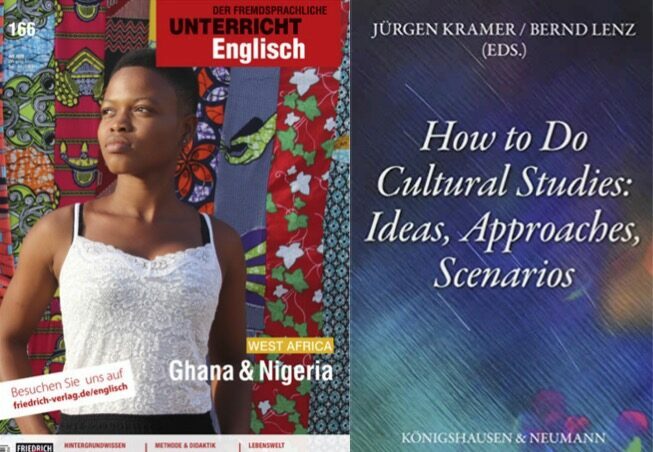 More recently, cultural learning in the English as a Foreign Language (EFL) classroom has been characterized by pluralization and diversification. This development is overdue, because for a long time, mainly under the heading of intercultural learning, it was oriented to a quite traditional kind of Landeskunde content with a nation-based concept of culture and quite a traditional idea of Anglophone spaces: Great Britain and Ireland, the USA and Australia. These spaces must also have their place in the EFL classroom, but fixing attention to them constantly may also obscure a clear view of important cultural developments on a global scale that must not be ignored or marginalized in the EFL classroom.

Bernd Lenz (Passau) and Jürgen Kramer (Dortmund) are among those scholars who have established Cultural Studies of British provenance in Germany in school education and also in higher education. They have led it to considerable success, also and especially in teacher education. Now they have published a volume in which “ideas, concepts, scenarios” for teaching cultural studies in higher education are collected. A wide range of central concepts for university classrooms are presented here: ‘Class’ in the contribution by Ellen Grünkemeier; ‘Cultural Memory’ by Gabriele Linke; ‘Race, Ethnicity and Representation in Britain’ by Gerold Sedlmayer; ‘Festivals, Jubilees and Anniversaries’ by Bernd Lenz; ‘Myths of British Monarchy’ by Anette Pankratz and many more. The basic idea is that in the contributions these central concepts are presented with the corresponding research; materials, scenarios and handouts are provided so that the contributions encourage other scholars and lecturers to apply them in their own university classrooms.

In my contribution to the volume, I present a seminar on “Cultures of Surveillance” applying ethnographic research as an approach as well as the active participation of students as researchers in an academic conference. I have already presented this project in a post on this blog.

Apart from South Africa, which was really present in the EFL classroom during the FIFA championship in the country in 2010, the entire African continent was almost completely ignored in the EFL curricula. This has changed recently due to the fact that Nigeria has been designated as an Abitur topic in North Rhine-Westphalia. But of course the perspective has to be opened and broadened for EFL to all colonial Anglophone areas of Africa. This is the background to the special issue of Der fremdsprachliche Unterricht Englisch on West Africa which I edited in 2020. In the introductory article, Andrea Rummel and I argue that engaging with Britain’s colonial history and the postcolonial constitution of English-speaking African societies is urgent. One of the lessons of this history: it is not even appropriate to approach African societies with European notions of the nation state. Here is the table of contents with trailers to the individual contributions.