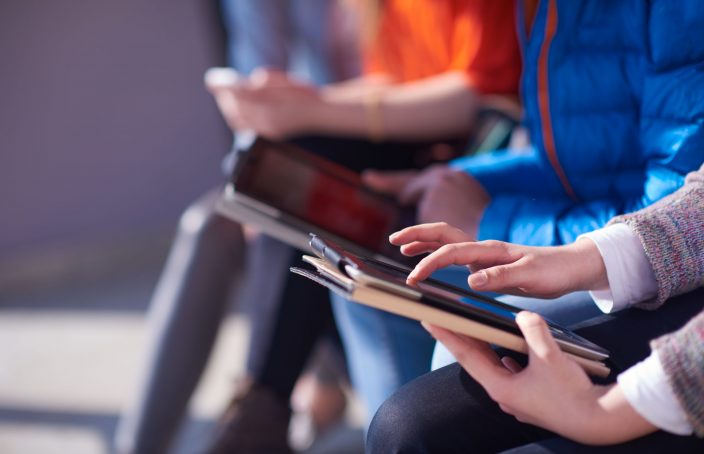 Let us begin with a few observations all of us have probably made. There is this young woman outside a restaurant in Milan on a beautiful summer day. Next to her, there’s a young man, maybe her boyfriend or a friend of hers; they have ordered a meal and soon the spaghetti are served. Before beginning to dine they both check their mobile phones. Whereas the man is done with the checking his facebook account or whatever contacts he needed to check after a minute or two and turns to the spaghetti, the woman obviously gets carried away by what she has to read or look at on her phone. She doesn’t touch the pasta in front of her nor does she talk to the man; she doesn’t speak a single word and doesn’t even look at him.

She seems to have forgotten that she is not on her own. One would also have expected the man to remind his company of the meal in front of her or to point to them silently so she would become aware that her spaghetti would probably be cold by the time she would finally eat them. This goes on for a while, until the man has emptied his plate. Only then does the woman put her phone away and begin to dine. They also begin to converse now, there are no bad feelings of any sort visible. There is obviously nothing about this scene of asynchronicity that they find unusual. Obviously, the couple had a sort of agreement that they wouldn’t interfere with each other’s communicative priorities,with a life split between two universes, ‘online’ and ‘offline’, and irreparably bicentred (Zygmunt Bauman in Bauman & Lyon 2013, p. 37), with a presence that can, as a matter of fact, be an absence.

Have we really understood the implications of such communicative constellations and practices? This question, of course, does not refer to cultural changes that we may regret or find unacceptable, like standards of politeness or (in-)appropriate behaviour. Rather, such a scene, which probably happens a hundred million times a day,  points to cultural changes that will inevitably lead not only to a redefinition of politeness or of standards of interactional behaviour, but to a complete re-conceptualization of ‘communication’.  The real questions would then be: How come that physical co-presence does no longer privilege those present in a given situation? How come that the rules of a given communicative and interactional ‘situation’ are no longer determined by the physical environment? And does distance communication outweigh the chance to turn to somebody sitting right next to me?

I believe that in linguistics and language learning we have deeply inhaled the assumptions underlying an ages-old communication model in which there is a sender and a receiver co-present in a given communicative situation who are subject to the same context factors and whose communication is determined by the mutual will to communicate ‘something’ to a co-present ‘somebody’.

However, in the new world of simultaneous on-and-offline communicaton, not even a physical companion sitting next to the interlocutor and two plates of spaghetti plus a pleasant summer atmosphere are obviously able to create a sense of co-presence in a material environment that would privilege face-to-face communication over communicating in what is termed ‘social media’. We have begun to live in two universes.